© 2020 Autosport.  All rights reserved.
Previous / Breen "confident" of Hyundai WRC return on Ypres Rally
Next / Tanak "pretty sure" he will restart Rally Turkey

Nine-time champion Sebastien Loeb holds the overnight lead as the FIA World Rally Championship resumes in Turkey for the fifth round of its coronavirus-hit season.

The veteran Frenchman, who is driving a limited schedule for Hyundai in 2020, made full use of his advantageous road position to head the field at the opening rest halt.

Although he is not a factor in the battle for this year's drivers' title, Loeb has won in Turkey on three previous occasions and his presence is intended to maximise Hyundai's bid to secure the WRC manufacturers' crown.

Just 1.2 seconds behind Loeb lies his Hyundai team-mate Thierry Neuville, who arrived in Turkey with his title hopes in the balance after retiring from the previous two events in Mexico and Estonia.

Neuville won the opening 13.9 km stage at Icmeler from Loeb by a margin of 3.3-seconds with the sister Hyundai of Ott Tanak, winner of Rally Estonia two weeks ago, just 0.2 seconds further back.

Then came the second stage, an 11.3 km run through Gokce, in which the dense clouds of dust thrown up by the WRC runners failed to clear along much of the route and penalised many drivers as they struggled with severe visibility issues. 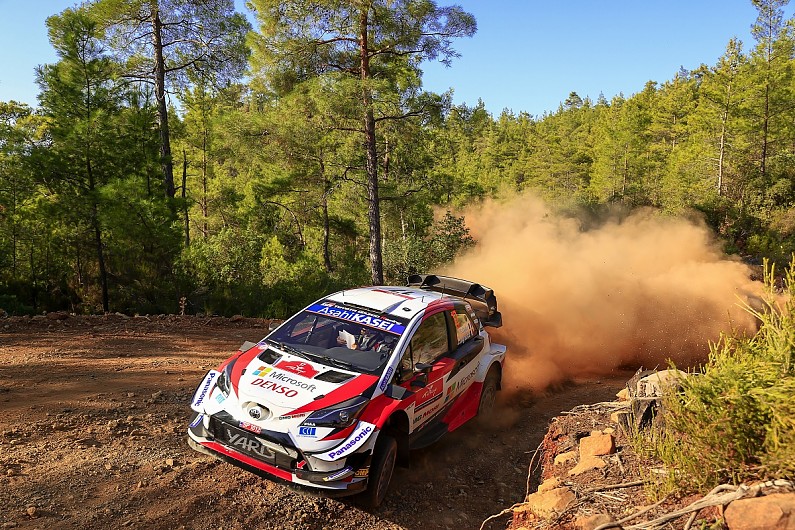 Running first on the road with no such problems was Toyota's current leader in the drivers' standings, six-time WRC champion Sebastien Ogier. The French star had been sitting in fifth place after sweeping the road on the first stage but vaulted up the order into third overall.

Ogier had been 1.2 seconds behind his British team-mate Elfyn Evans but was able to jump ahead after his run, while the third Toyota of teenager Kalle Rovanpera jumped up the order from seventh to fifth.

The biggest loser on the stage was Tanak, who emerged from the hanging dust in seventh place overall after losing ground to the Toyotas and the M-Sport Fiesta of Teemu Suninen.

"It feels really nice; I didn't expect to be leading tonight!" Loeb said as the cars came in to service. "At the end I tried to push, I had precise notes so I was able to do it."

The shortened rally itinerary, being held with no spectators present, will resume for two loops of the same three stages on Saturday and begin with the 32km epic of Yesilbelde.

As was the case in Estonia, the running order will be reversed based upon the positions at the mid-day service and on this, the roughest and most rock-strewn event on the calendar.

The Toyota and Hyundai teams can be expected to play out a highly strategic battle on Saturday to achieve the best road position.