Lappi swept to top spot after overcoming seven-time champion and current points leader Sébastien Ogier, as the first rally since the COVID-19-enforced hiatus got underway this evening in front of thousands of socially-distanced fans on the short 1.28-km spectator stage at Tartu.

Ogier got the ball rolling with what appeared to be a rather tentative run through the stage in his Toyota Yaris WRC, stopping the clocks with a time of 1m17.0s on the narrow, twisting gravel.

Britain's Elfyn Evans, who led the drivers' standings briefly back in March after taking victory in Sweden, guided the second Toyota through with even greater circumspection, his time more than half a second off the Frenchman's run.

Thierry Neuville then overdid his run at the start; this year's Monte Carlo Rally winner fired his Hyundai I20 Coupe WRC wide on the second corner of the rally and slithered to the finish 1.5 seconds adrift of Ogier's target time.

Several other front-runners found that the Tartu stage presented a serious challenge, with the hefty straw bales claiming several expensive chunks of aerodynamic equipment as the evening progressed.

Among those who sent the hay flying was the reigning world champion Ott Tanak, who ended up just 0.1s off the lead at his home event. 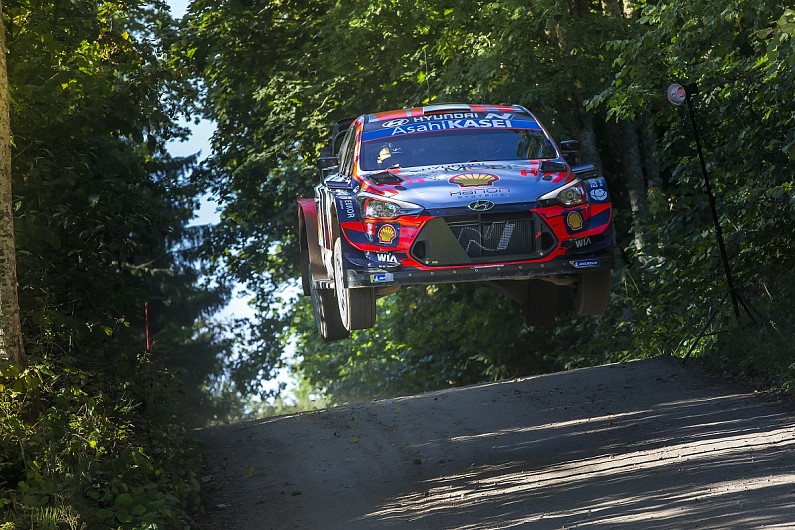 But Lappi then took advantage, the Finn shading Ogier's time in the Fiesta WRC by hundredths of a second.

After his car was destroyed by fire at the last event in Mexico, and in a difficult financial climate for his team, Lappi was equally surprised and delighted to have set the pace.

"It didn't feel that good to be honest," he said.

"This is not really what the stages will be tomorrow but we had a good shakedown, a good opening stage, [so I'm] looking forward!"

With Lappi and Ogier heading Tanak at the top of the timesheets, Craig Breen - a former winner of Rally Estonia - threw down his marker to hold fourth overnight in one of his outings in the works Hyundai squad, sitting 0.2s ahead of Evans.

In the WRC2 category, current points leader Mads Ostberg stamped his authority on the other junior runners, setting sixth fastest time overall at the wheel of his Citroen C3 R5.

Ostberg's closest challenger was Swedish driver Pontus Tidemand, winner of the previous round in Mexico, who sat 0.2s behind in ninth overall in his Skoda Fabia R5.

Tidemand was uncertain of continuing with the championship due to an absence of funds, but the post-COVID calendar has greatly reduced travel budgets and his sponsor-less presence has guaranteed a strong battle with Ostberg in the days ahead.

The rally restarts tomorrow morning with the 21km Prangli stage starting at 07:40, opening a busy 11-stage itinerary for the day.