© 2021 Autosport.  All rights reserved.
Previous / NASCAR doesn't expect new OEMs without hybrid move
Next / Jordan: Wallace has talent to "learn how to win"

Erik Jones and Martin Truex Jr are the latest NASCAR Cup drivers to be hit with a penalty before the Daytona 500, taking the number of drivers penalised to eight.

Jones, who has switched to Richard Petty Motorsports for the 2021 campaign after being dropped by Joe Gibbs Racing, fell foul of the single engine rule.

The regulations state that if the engine in the nominated primary car is changed after the qualifying Duel races, the driver must start at the rear of the field for the 500, and the following race on the calendar - next weekend's event on the Daytona road course.

Jones had qualified his #43 Chevrolet Camaro in 31st position, but will now drop to the rear on the formation laps before the 200-lap encounter on the 2.5-mile superspeedway oval.

With final practice ahead of the 500 washed out earlier today due to thunderstorms in Florida, Truex's #19 Gibbs crew were forced into changing both the radiator and oil cooler on his Toyota Camry machine.

As the full engine was not changed in Truex's case, he will not serve a penalty next weekend.

Jones and Truex are the latest drivers to drop to the rear after the six drivers that were embroiled in the melee during the second Duel race on Thursday evening.

William Byron had qualified on the front row for Hendrick Motorsports, but was slammed into the Turn 3 wall in the incident triggered when Brad Keselowski tagged Garrett Smithley on Lap 56 of 60. 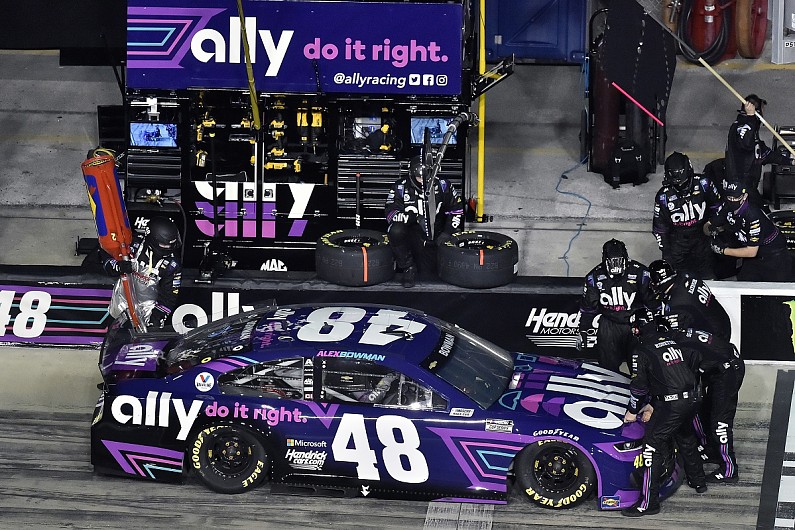 The bodywork damage to Byron's Camaro was extensive, with the #24 crew swiftly bringing the spare car off the trailer to begin prepping it soon after the incident.

The other drivers who will drop to the rear include Cup Series rookie Anthony Alfredo, Cole Custer, Ross Chastain and Kaz Grala.

Pole-sitter Alex Bowman (above) experienced engine vibrations during his Duel race, with the team trying to identify and trouble-shoot the problem during the event.

Crew chief Greg Ives was confident that the problem with the #48 Camaro had been rectified, with the team hesitant to change Bowman's engine and pay the same penalty as Jones.