© 2020 Autosport.  All rights reserved.
Previous / Crutchlow: Honda not wrong to move Marquez to LCR
Next / Nakagami to get factory-spec Honda bike in '21

Andrea Dovizioso and Danilo Petrucci insist there have been no discussions regarding Ducati team orders despite the pair's fallout after MotoGP Aragon Grand Prix qualifying.

Dovizioso was angry at team-mate Petrucci for using him as a reference to improve his lap time in the first part of Aragon qualifying last weekend, which led to the former being knocked out of Q1 and forced to start from 13th on the grid.

Petrucci's actions were defended by Ducati at the time, but Dovizioso said it wasn't a "smart" plan on Petrucci's part and felt he should have done more to help Ducati's main title hope.

Dovizioso recovered to seventh in the race and is now just 15 points off the championship lead, while Petrucci who qualified in eighth place faded to 15th place in the race.

When asked if there will be a plan in place to employ team orders this weekend at the Teruel GP, Dovizioso replied: "No, in this moment there isn't any team orders and we didn't speak about that.

"So, in this moment everything stays the same."

Autosport asked Petrucci the same question, and he echoed his team-mate's comments while admitting he hasn't spoken to Dovizioso about what happened in qualifying last week.

"No, after the race there wasn't the chance to talk," he said. "We were both quite tired after the race, but everything is clear.

"We haven't spoken in any case about team orders this week. It's quite early this week." 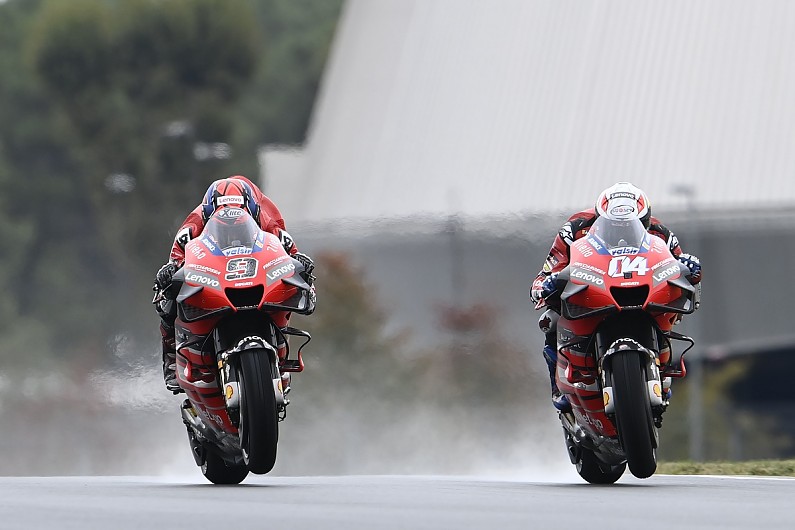 Earlier on Thursday both Suzuki riders dismissed suggestions Alex Rins could now be asked to help championship leader Joan Mir, with the latter admitting it's "not fair" to impose team orders as his team-mate still has his own chance to win the title.

Dovizioso endured a tough Aragon GP weekend, with the colder temperatures seen throughout most of the session causing grip issues for all Ducati riders.

Since his Austrian GP win in August, Dovizioso hasn't returned to the podium and his haul of points since has been just 50 relative to the 90 Mir has collected in the same run of races.

As such, Dovizioso's sees the Teruel GP as "very important" in solidifying his title credentials heading into the final triple-header next month.

"Even more because there are four races remaining and the points [gap] is not too big, but we have to start to gain some points if we have to fight for the championship.

"And we will be very focussed. We know how difficult this weekend will be because everybody will be faster. So, to be in top 10 in practice will be very difficult.

"But at the end I think we can be faster than last weekend and the weather looks like it will be a bit better.

"We will be focussed and try to start in the first two rows. That will be make a big difference because everybody is struggling with the tyres.

"So, to be there and riding in a better way, to be consistent from the beginning to the end will make the difference."

Share this article on Facebook Twitter LinkedIn Email
Previous / Crutchlow: Honda not wrong to move Marquez to LCR
Next / Nakagami to get factory-spec Honda bike in '21
? 2020 Autosport