© 2020 Autosport.  All rights reserved.
Previous / Morbidelli "looking forward" to Rossi fight in 2021
Next / Quartararo "not thinking" about beating Vinales

Pol Espargaro says he is "really convinced" he can replicate his KTM podium success on the Honda in 2021 amid questions asking if he is regretting his next MotoGP move.

As first revealed by Autosport earlier this year, Espargaro will join Marc Marquez at the factory Honda squad next season, with Alex Marquez being moved to LCR on a two-year deal with HRC.

Though Honda has won six of the last seven riders' titles with Marc Marquez, it has endured a miserable 2020 campaign which is yet to yield a podium result - with the best-placed Honda rider Takaaki Nakagami on the year-old RC213V in seventh in the championship.

The absence of Marquez through an arm injury since the Spanish Grand Prix has called into question Honda's current bike philosophy, though both HRC team boss Alberto Puig and LCR's Cal Crutchlow insist a rethink is not needed.

Meanwhile, KTM has won twice in 2020, while Espargaro has scored two podiums - the most recent of which coming at the Emilia Romagna GP.

He has repeatedly been asked if he is now regretting his decision to join Honda in 2021, but is "convinced" he can do what he had done on the KTM on the RC213V. 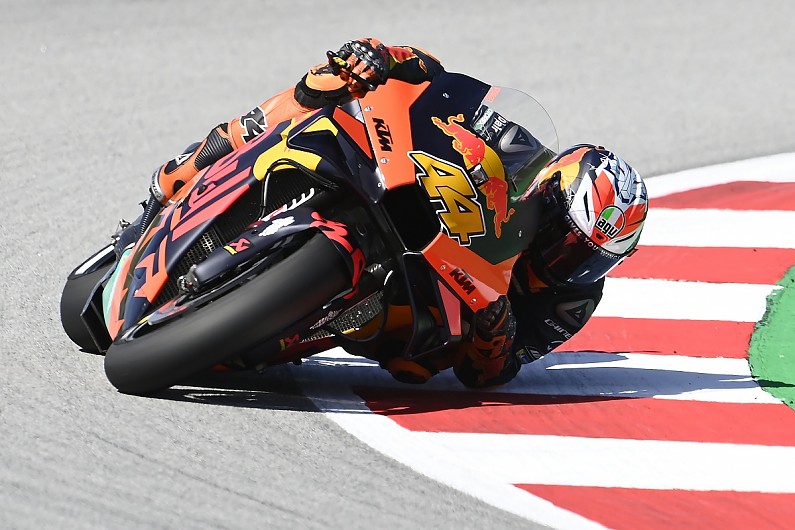 "So, you put the facts on the table at the moment you need to make the decision, and then you choose the best decision.

"In the moment you take the decision, you have all the things on the table and you choose what you think is better.

"So, now to go backwards to the time I made the decision and say 'oh, now I should do that' or 'now I think it's a bad decision', this is just losing time because every time you make a decision you make it for the better.

"So, at the moment I'm really convinced I can do the same results with the Honda [that I'm doing with KTM].

"If not, I will take my time, but I will fight for it like I have been doing with KTM for the last four years.

"I started last in Qatar four years ago, and now we are on the podium.

"So, if I can make it, I will do it with the Honda fighting again."

Espargaro currently sits 12th in the standings after crashing from the Catalan GP on 57 points, 30 clear of the highest-placed 2020 Honda of Alex Marquez in 16th.