KTM's Pol Espargaro says he has "never been so inconsistent" in a MotoGP season as he is now after crashing out of Sunday's Catalan Grand Prix.

Espargaro crashed out of Sunday's race at Catalunya while running eighth on the 13th lap, losing him ground in the championship as he drops to 51 points adrift of race winner Fabio Quartararo in 12th in the standings.

This was Espargaro's third DNF of the season, after he was taken out in collisions with Johann Zarco and Miguel Oliveira at the Czech and Austrian GPs last month.

Espargaro had podium pace in both Jerez races in July, but qualifying off the front two rows meant he couldn't advance on sixth and seventh, while his podiums in the Styrian and Emilia Romagna races sandwiched a 10th-place finish in the San Marino GP.

The KTM rider admits he "keeps losing" points this season, which is "super-painful" for his championship bid, and says his inconsistent form is like "someone is shaking us".

"As this championship is going up and down so much, it's difficult to predict anything," he replied when asked if his championship ambitions had changed after his Catalan GP crash.

"So, he lost the leadership of the championship.

"This championship is very unpredictable, so who's to tell you that maybe we go to Le Mans and our result is amazing and the others make mistakes? 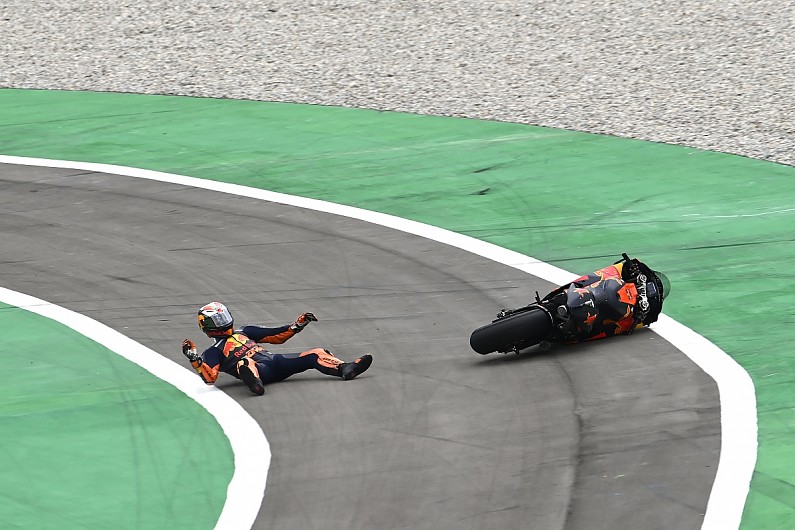 "For sure, my result here doesn't help at all.

"That's 100%, but it's hard because we know losing points is super-painful for the championship and we keep losing them.

The low temperatures in Sunday's race worked against Espargaro as he was forced into running the medium front tyre instead of the soft, as it's "impossible" to use on the KTM.

KTM riders have typically favoured the harder option front tyres in 2020, with Espargaro noting that it's similar to the problem Honda riders faced in recent seasons.

"We have this problem that maybe Honda had last year when they always were using harder compounds," he added.

"So now it looks like compared to the other manufacturers, especially to Yamaha and Ducati, we always go to the harder compounds on the front.

"And as soon as we cannot use them to stop the bike, this [medium] tyre... if it had been sunny normally we're not too bad, we could push very good.

"But because of these cold conditions, the medium tyre was not working. But the other option was to use the soft front, and for us no way, impossible to use.