Will Power took pole at the Indianapolis road course for the second Harvest Grand Prix race, while championship contenders Josef Newgarden and Scott Dixon will start ninth and 15th respectively.

In the first qualifying group, Alex Palou of Dale Coyne Racing with Team Goh used two fresh sets of red tyres to set a 1m09.2s lap and then followed up with a 1m09.1584s effort.

Colton Herta then responded with a 1m09.1017s which remained unmatchable, although Andretti stablemate Ryan Hunter-Reay drew within one-tenth of the pair to land P3.

Herta thus grabbed a championship point for his efforts and secured a guaranteed front-row start.

Felix Rosenqvist was fourth for Chip Ganassi Racing, but Race 1 polesitter Rinus VeeKay was only seventh after making a mistake on his quickest lap.

In the second group, 2020 Indy 500 winner Takuma Sato went straight out on the red-walled tyre and set a 1m09.7584s, while Team Penske's Power turned a 1m09.9s on the harder compound Firestone primaries. 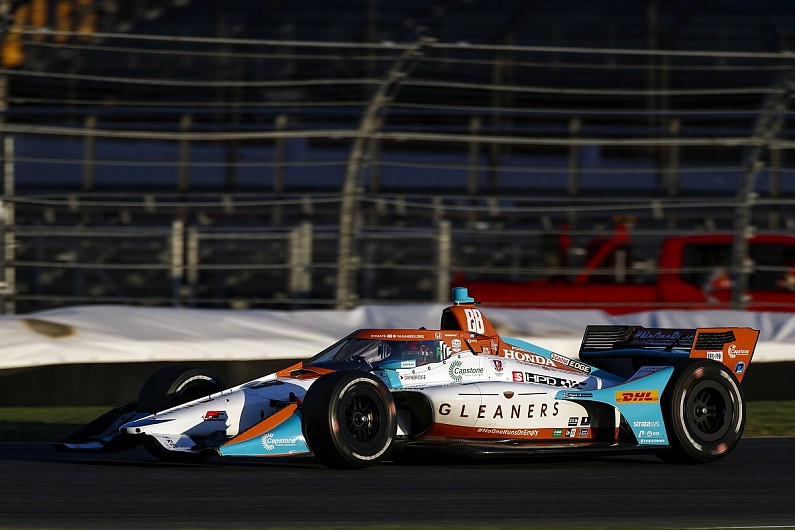 Then switching to reds, Power then delivered the killer punch with a 1m08.9767s lap around the 2.439-mile road course, a quarter of a second faster than the next fastest driver in the group, Alexander Rossi of Andretti Autosport.

Arrow McLaren SP's Pato O'Ward was third, and so they will start third and fifth respectively, alongside Palou and Hunter-Reay.

Race 1 winner Josef Newgarden was fifth fastest in the faster group and so will begin ninth, while his championship adversary Scott Dixon of Chip Ganassi Racing was eighth - securing a 15th-place start.

Lap times in Group 2 were all within one second of Power's pole, which is the 61st of his career and the fourth of the season.

Jack Harvey was fourth in the second group and will hence begin from seventh place for the combined grid, alongside Felix Rosenqvist.

Newgarden starts alongside Graham Rahal on the fifth row, who completes the top 10.