Jackson, in his 224th BTCC start, gave some joy to the Motorbase Performance Ford Focus team at the end of a race that was red-flagged due to a terrifying crash for his team-mate Rory Butcher.

Title contender Butcher, striving to recover from his spin when he was nerfed off by Sutton in the second race, was attempting to pass Matt Neal for seventh on lap six when they made contact in the left-handed Maggotts kink.

Butcher, on the outside, was sent careering across the grass, where he smashed backwards in the Armco barrier, and this launched him into a barrel-roll that ended in the middle of the track at Becketts.

Miraculously, Butcher was avoided by the pack and he emerged from the car under his own steam.

Jackson had got the jump at the initial start from the polesitting West Surrey Racing-run BMW 330i M Sport of Tom Oliphant, and the duo were tied together until Butcher's accident.

Once again, Jackson led at the restart of the shortened 12-lapper from Oliphant, and once more the BMW driver attempted to prise away the lead from the Ford man.

There was minor contact between the two at Brooklands on the second lap, although both continued without losing position, and on the seventh tour Oliphant got down the inside at Copse Corner, only to run wide on exit and allow Jackson back down the inside for Becketts. 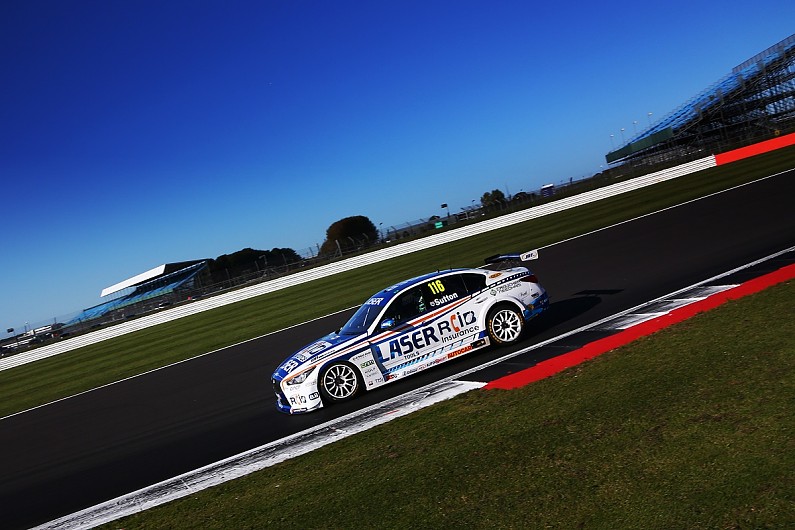 Oil on the track made things tricky, and it was Sutton who emerged in third position from a crazy battle with the Hondas of Josh Cook, Tom Chilton and Dan Cammish plus the Mercedes of Adam Morgan.

It was an incredible drive from Sutton, who had taken the original start from 26th on the grid following his puncture in race two, and was 14th in the line-up at the restart.

Sutton instantly caught up the battling leading duo, but Oliphant's defence was resolute enough to keep the Laser Tools Racing Infiniti Q50 behind until the final lap.

A move that had begun at Brooklands on the penultimate lap ended with Sutton finally claiming the inside line at Maggotts and second place from Oliphant half a tour later, but he'd run wide off track at Copse Corner while executing it.

With just half a lap remaining, Sutton ran out of time to catch Jackson, who crossed the line 0.312 seconds in front.

Some time after the race finished, he was penalised back to third position behind Oliphant for gaining an unfair advantage in running wide at Copse.

Cammish took fourth in his Team Dynamics-run Honda Civic Type-R to complete a very good day for his points tally, while the Ciceley Motorsport Mercedes of Morgan was fifth, having run as high as third.

Turkington did run eighth in the initial race in his WSR BMW, but appeared to be able to find no way through the warring hordes after the restart, and has now lost the championship lead once again to Sutton.

Tom Ingram, whose Toyota started at the back of the grid with Sutton, was taken out on the first lap at Luffield while running side by side with Tom Onslow-Cole and Carl Boardley - Onslow-Cole got pinched in the middle and unavoidably made contact with Ingram, who was sent into the barriers.