Honda's Dan Cammish held off the Toyota of Tom Ingram to claim victory in the first British Touring Car Championship race of the day at Silverstone.

Unlike at Thruxton last weekend, poleman Cammish managed to cling on ahead of fellow front-row starter Ingram at the getaway, although he had to run wide at Copse to keep his nose in front.

Ingram came back at Cammish along the Wellington Straight, the duo running side by side before Cammish claimed the inside line for Brooklands.

Cammish's Team Dynamics-run Civic Type-R was just about managing to keep the Speedworks Motorsport Corolla of Ingram at bay when the safety car was called on the fifth lap - Michael Crees having spun his Honda into James Gornall's Audi, and the Civic was left beached in the gravel at Becketts.

At the same time Ingram saw his chance for the lead, chiselling an opening on the inside of Luffield, and he and Cammish ran to the start-finish line side by side.

The timing screens showed Ingram was ahead by 0.009 seconds, so would crucially take the restart in front, but photographic evidence suggested that Cammish was actually ahead and Ingram ceded the lead under caution.

The safety car returned to the pits with 17 laps of racing still to go, and Ingram once again applied the pressure to Cammish.

But with seven laps remaining Cammish eked the gap out to over 1s, and he eventually crossed the finish line 1.081s in front.

"I got it off the line well, but once we were up and running Tom had a load of traction to begin with," said Cammish.

"Thankfully the safety car saved me a little bit - after that Tom's traction advantage went away and I was able to stretch my legs a little bit." 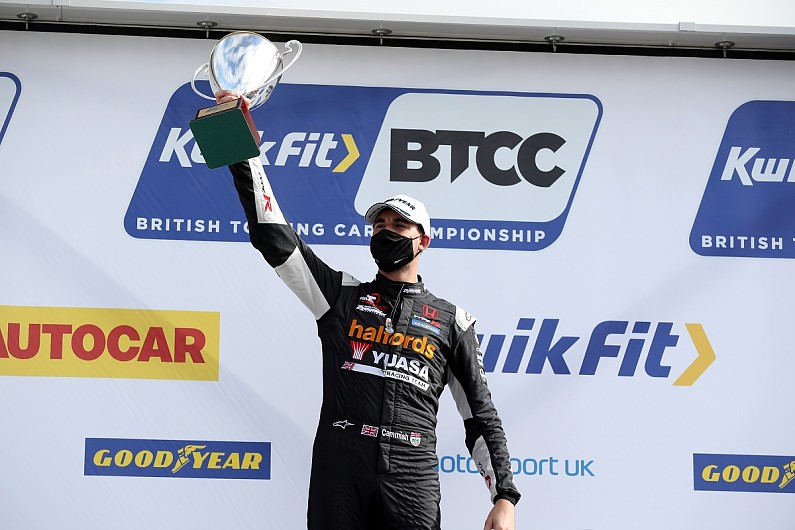 "I thought 'bingo - that's a chance to pass Dan when he might not be thinking about it'," said Ingram of the safety car.

"I came over the radio and asked who was ahead at the line.

"It [conceding the lead under caution] was obviously the right thing to do rather than risk taking a penalty after the race."

Rory Butcher managed to keep the heavily success-ballasted rear-wheel-drive cars of Colin Turkington and Ash Sutton behind him to complete the podium.

Butcher bogged down at the start from third on the grid when he got the biting point wrong on the clutch of his Motorbase Performance Ford Focus, but kept it lit through Copse to muscle back ahead of the West Surrey Racing-run BMW 330i M Sports of Turkington and Tom Oliphant.

From then on, Butcher lacked pace in the slow-speed corners, and three times was nudged by Turkington, but he clung onto the position.

Later in the race, Turkington had to divert his attentions to fending off the Laser Tools Racing Infiniti Q50 of championship leader Sutton, who had moved up to fifth when right-rear suspension problems forced Oliphant to the pits.

Sutton was alongside Turkington on the run to Copse on the final lap, but had to settle for fifth.

Adam Morgan claimed sixth in his Ciceley Motorsport Mercedes, while Jake Hill took advantage of a wild moment between fellow Honda drivers Matt Neal and Tom Chilton at Becketts to move ahead of both, Hill's MB Motorsport Civic beating Neal's Dynamics car to the line for seventh.

Stephen Jelley rose up the order from 14th on the grid to finish ninth in his Team Parker Racing BMW 125i M Sport, with Josh Cook completing the top 10 in his BTC Racing Honda.