Cammish set no fewer than four laps good enough for pole in his Team Dynamics-run Civic Type-R, which is carrying 36kg of success ballast.

He had already set a 57.465s on his first run when he lowered that to a 57.349s on his second shot, and he also stamped in a 57.536s on a final run, all this through intermittent drizzle that made conditions tricky.

That put him a large, by Silverstone National Circuit standards, 0.198 seconds clear of the Speedworks Motorsport-run Toyota Corolla of Tom Ingram.

Just as at Thruxton last weekend, Cammish and Ingram will therefore share the front row, although that resulted in two Ingram wins after Cammish struggled with his starts.

"It's a hell of a gap around here," Cammish told Autosport regarding his pole margin.

"My lap in FP2 was good, and I knew there was a little more to come on better tyres. The track grip wasn't quite as good, but the new-tyre grip counted.

"My plan is to get a good night's sleep and get that bloody thing off the line!" 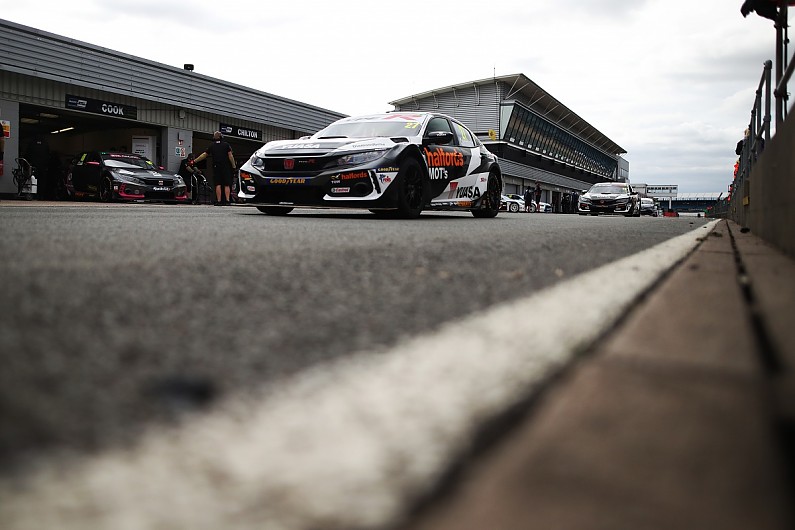 Ingram, who is carrying 48kg of ballast, left it until moments before the chequered flag to set his time.

"Dan's obviously a little bit nervous of his starts because he keeps talking about them," he said. "So I'll keep bringing them up!"

While the gap for Cammish was immense, the following four were covered by just 0.010s, with Ingram heading Rory Butcher, Colin Turkington and Tom Oliphant.

Butcher, on 42kg of ballast in his Motorbase Performance Ford Focus, had looked spectacular all day without really troubling the frontrunners until he popped up in third position towards the end of the session.

The rear-wheel-drive West Surrey Racing-run BMW 330i M Sports of Turkington and Oliphant went on what was effectively a 16-lap race run in the cold conditions, during which they were attempting to tow each other around.

Turkington, on 54kg of ballast, improved to fourth to pip Oliphant (30kg), although Oliphant had an earlier time good enough for the front row deleted due to breaching track limits.

Matt Neal, in the second Honda, was in the top four for most of the session before the late improvements relegated him to sixth, although that was sufficient to head championship leader Ash Sutton, carrying the maximum 60kg of ballast on his Laser Tools Racing Infiniti Q50. 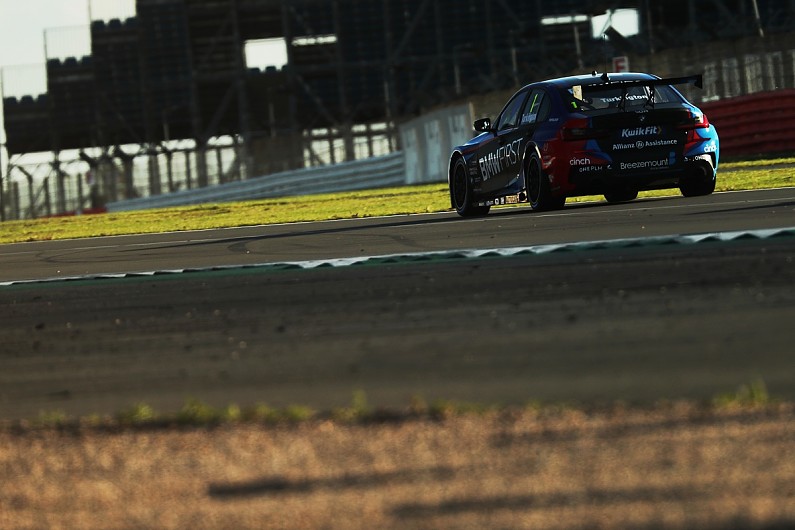 Sutton will share the fourth row with the Ciceley Motorsport Mercedes A-Class of Adam Morgan.

The session was red-flagged before any serious times were set when Jack Butel, attempting to weave heat into the tyres of his Ciceley Mercedes on the Wellington Straight, careered into the Trade Price Cars Audi of James Gornall.

Gornall parked on the grass on the exit of Brooklands with collapsed right-front suspension, which meant he failed to set a time.