Dan Cammish led Matt Neal in a Honda 1-2 in free practice for the British Touring Car Championship round at Silverstone.

Cammish, who is carrying 36kg of success ballast on his Team Dynamics-run Civic Type R, lapped the National Circuit 0.088 seconds quicker than the sister car of veteran Neal, who has moved up to 12kg of ballast following his double podium last time out at Thruxton.

The Hondas look well poised in the corners, and the Neil Brown-powered machines also emerged top of the speed traps in both sessions.

Championship leader Ash Sutton, carrying the full 60kg of ballast on his Laser Tools Racing Infiniti, had a very strong free practice at Silverstone - something that has not always been the case this season.

Sutton headed the first session by 0.090s from the Speedworks Motorsport-run Toyota Corolla of Tom Ingram, while the Hondas of Neal and Cammish were down in fifth and sixth, with Cammish having a quick spin at Becketts.

Sutton (below) almost matched his morning time early doors in the lunchtime session, before running round in tandem with team-mate Aiden Moffat in what appeared to be a slipstream rehearsal before qualifying. 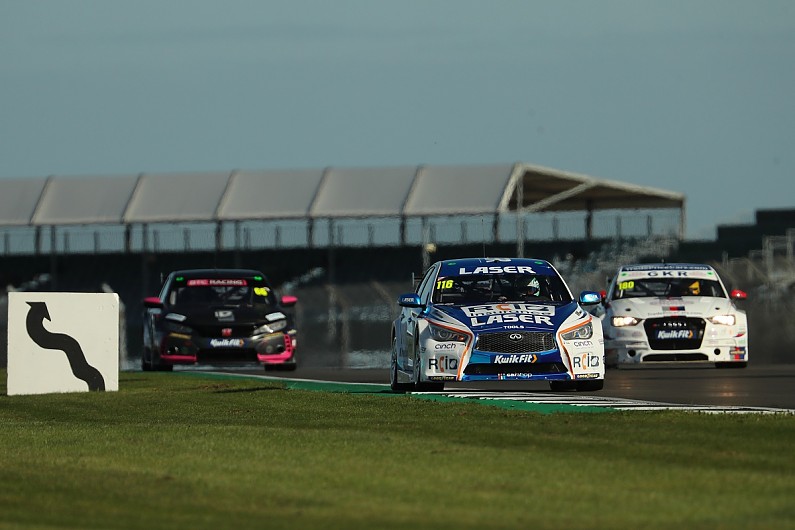 Ingram, who has won five races in the past four seasons at Silverstone - none of them reversed-grid counters - didn't quite improve on his morning time either, even though he leapt up to fourth in the second session on the final lap, behind Sutton.

The Toyota is carrying 48kg of ballast following its pair of Thruxton wins that vaulted Ingram up to third in the championship, and the Speedworks team was happy with progress.

Reverse-grid Thruxton winner Josh Cook made it three Hondas in the top five with his BTC Racing machine, while Tom Oliphant's best time, which put him third in the opening session, was good for sixth overall in the lead West Surrey Racing-run BMW 330i M Sport on 30kg of ballast.

Oliphant and team-mate Colin Turkington, who is carrying 54kg of lead, embarked on a 13-lap run late in the second session in which they also appeared to be practising towing each other.

Adam Morgan improved in the second session to put his Ciceley Motorsport Mercedes A-Class seventh, although he followed that with a massive moment at Copse when he powered into the slide to get pointed back in the right direction, to the chagrin of his tyres.

Senna Proctor put in a good time while chasing Sutton on track that put him fourth in the morning, eighth overall in the leading Excelr8 Motorsport Hyundai i30.

Stephen Jelley made a late improvement while on a 16-lap 'race' run to go ninth in Team Parker Racing's BMW 125i M Sport, while the top 10 was completed by the improving James Gornall at the wheel of his Trade Price Cars Audi S3.

Turkington ended up 11th overall, one spot ahead of another of the title contenders, Rory Butcher in his Motorbase Performance Ford Focus, which is on 42kg of ballast.