Tom Onslow-Cole and Team Hard are confident they will be fighting further up the British Touring Car Championship field in the second event of his series comeback at Silverstone.

Onslow-Cole, a seven-time race winner in the BTCC, returned to the seat of a Team Hard Volkswagen CC for the first time in over seven years at Thruxton last weekend, and qualified 25th before taking a best of finish of 20th across the three races.

The 33-year-old is standing in for the injured Ollie Brown at Thruxton, Silverstone and the mid-October round at Croft.

With Hard team leader Jack Goff qualifying 21st and taking a best result of 14th at the Hampshire circuit, team boss Tony Gilham identified the track as being "the worst for our car, with its long wheelbase and all the undulations and bumps".

But the Silverstone National Circuit suits the CC much better, and Goff took a surprise victory there in 2019 thanks to the correct tyre strategy in a wet-dry race.

Onslow-Cole has been active predominantly in international GT racing since he last competed in the BTCC in 2013, and did not even get a shakedown in the VW.

"Coming in at the last minute for Thruxton is always going to be a big challenge, but we've moved forward through the weekend in terms of car speed," Onslow-Cole told Autosport.

"I was fresh in for Saturday morning, and over seven years I'd forgotten how it is in a touring car.

"But I feel back in the groove with it, and it's lovely to be back out with the team.

"I've had some cool battles on track - I just would have liked to have more speed." 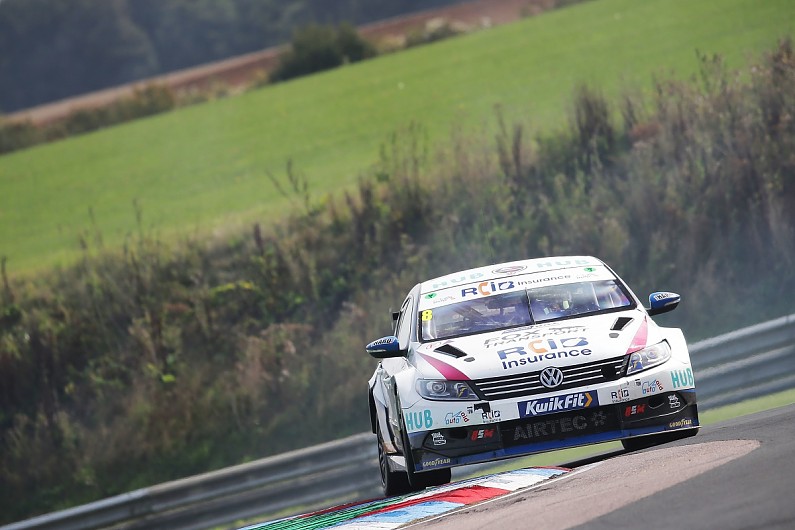 Onslow-Cole added that the CC is significantly different to when he scored three podium finishes with it in 2013 - it was originally designed behind the then-control GPRM subframe, but has since been re-engineered around RML-provided parts.

"It is an older car, and the team have done a wonderful job to try to keep it up to date," he said.

"But there comes a point when it's best to start on a new car rather than force updates on the one you've got.

"It was good fun to be back in a sprint race, and it's amazing how intense the 20-minute races are.

"I've learned lessons - I've done some terrible starts, so hopefully I've now got them out of my system!"

Hard is building new Cupra Leon machinery for 2021, and Gilham told Autosport that the first car should be ready by the end of this year, potentially making its public debut at Autosport International next January.

The other Hard VW driver, Nicolas Hamilton, retired from all three races at Thruxton with clutch problems.

"Nic has a bespoke clutch system, and there are no spares for it," explained Gilham.